CLAUSES THAT CAN CLOBBER YOU

No one likes to be blindsided, caught off guard or experience an unexpected, non-beneficial surprise. It’s bad enough getting hit up the side of the head when you’re nose to nose and toes to toes with an opponent. At least in that scenario you can calculate your next move, position yourself for retaliation or at the very least be prepared for the blow. However, when someone or something comes up from behind you with no warning; the impact can knock you for a loop – worse yet, bet devastating.

During speaker presentations at various cash flow events and with Investment Groups, we emphasis on “Due Diligence” vs “Doomed Diligence”. Whether you are a new note buyer, note consultant, note broker or have years of whiskers in the industry, to be successful; care should be taken to be aware of what you purchasing or brokering – “exactly”.

To that end, I would like to bring to your attention existence of a “Release Clause” which are from time to time contained in a Promissory Notes and/or Trust Deed or Mortgage that may clobber you. How?  Well, first of all for the Note Broker or Cash Flow Consultant the revelation of its existence can be an 11th Hour deal killer to an otherwise good note transaction. Who wants to lose a fee you have already spent!  Additionally, overlooking a “release clause” as well as any other clause contained in a note or trust deed reflects the thoroughness and credibility of the Broker. Responsible due diligence prior to packaging and offering the note to the upstream investor is the hallmark of a wise cash flow specialist. We all know you have to kiss a lot of frogs before you find a prince, so doesn’t it just make sense to recognize a frog before you kiss it?

So, first let’s define the “release clause”, then address where you might find one and then under what circumstances the clause may adversely affect the decision of the investor to purchase the note.

Release Clauses can be found in the Promissory Note or as an addendum in the Trust Deed or Mortgage. Sometimes in both and sometimes in one but not in the other. So, if the note seller supplies you with the Promissory Note only and you dig no further, you may find the actual agreement to release could be part of the recorded Trust Deed. Now here’s a situation I learned the hard way: sometimes there is simply an agreement in the Joint Purchase Agreement and Escrow Instructions used in most Real Estate transactions in California indicating that an “agreement to agree” was made between the buyer and seller. I am not addressing the “enforceability” of such an unrecorded agreement here. The point I am making is that an agreement to release a part of the security whether recorded or unrecorded could have an affect upon the note investors decision of whether or not to purchase. So, why not find it out sooner than later?

Basically, a release clause is part of a “Blanket Encumbrance” Trust Deed which calls for the payment of a specific amount of money, at which time the seller will “release” free and clear, a portion of the security. Lot releases are most often found in seller carry back financing on development land.  Sometimes called “partial release addendums” and are used by sub-dividers and developers of projects consisting of numerous lots to be resold separately.  The Trust Deed covers the entire parcel known as a “blanket encumbrance” with allows for releases allowing the developer to subsequently convey each lot free and clear in order to accomplish the resale objective. The release price paid applies to principal reduction only, not other amounts due on the carry back note such as interest.

Typically, the partial release sets a release price for each lot equal to 1 ½ times each lot’s pro-rata shares of the original amount of the note. Sometimes it is a “pro-rata” per acre release. A type “Standard Release” for a specific amount of money also exist which, depending on the amount and timing of release may not be in the best interest of the Trust Deed/Note Holder. The manner and timing of release is determined at the time the original carry back seller negotiated with the developer and many variables can exist.

Of significant importance is the order in which lots are to be released. For instance, release clauses that do not take into consideration a premium amount to be paid for the release of the premium lots and or the order in which lots may be released, could cause the value of the security of the note to be adversely affected.  Therefore, it just makes sense that the purchaser of a note containing “release clause” provision have the opportunity prior to purchase to review and approve of the order in which the lots are planned to be released.  A Tract Map approved by the Local Planning Authority will also be required of the Trustor before lots can be sold separately.

The due on sale clause contained in the “blanket encumbrance” trust deeds does not apply to the lots re-conveyed under the partial release clause. However, if the developer goes ahead and sells one of the lots without the consent of the beneficiary, the due on sale is triggered.  In fact, in California (similar code sections probably apply in other States) a developer is prohibited from selling lots, which are subject to a blanket encumbrance unless a release clause unconditionally exists. (CA B&P & Profession Code 11013.1)

The financial affect of the exercise of the release clause would be similar to a series of “special principal payments”. Except, unlike special principal payments in the note, with the release payments, the beneficiary has little or no control over “the timing” of the return of capital for reinvesting or prepare to offset accrued interest expense.  The investor could very well purchase the note expecting the funds would have invested at say 15% for at least 12 months, and then out of nowhere comes a request for a partial re-conveyance just 3 months after purchase of the note. Worse yet, having no control over the timing the investor could get clobbered with a request for partial re-conveyance with the payment of a chunk of cash and interest arriving on December 31st with no time for tax planning.

A wise and prudent cash flow specialist will perform a reasonable amount of due diligence prior to offering a note to a prospective investor. Pull a copy of the Trust Deed for goodness sake, request copies of the closing statement when the carry back note was created and be knowledgeable of the type and kind of security of the note.  Don’t wait to get “clobbered” with clauses such as Subordination Agreements and Release Clauses. Know what you have – EXACTLY! 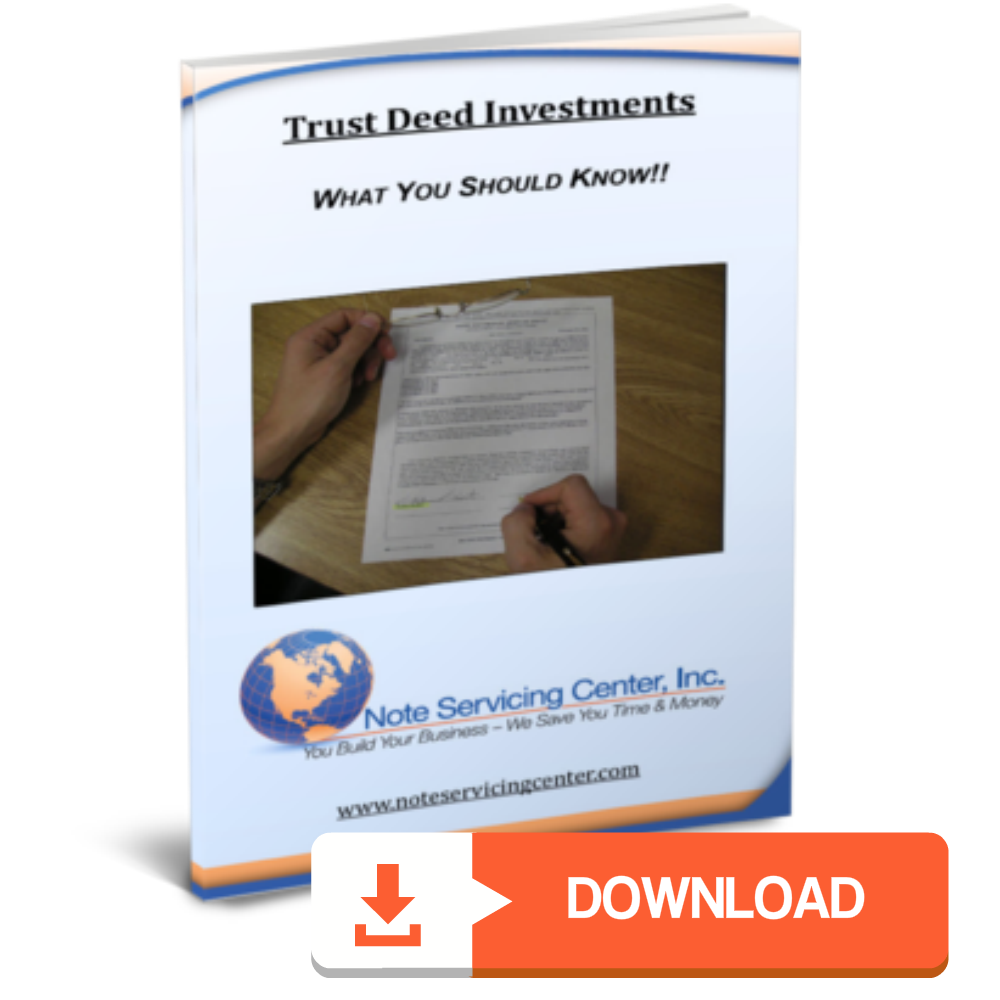